In these days of dire economic hardships, Americans must stick together.‚  Homes are being foreclosed on, the stock market is sinking and credit is no longer cheap and easy.‚  America is officially in a recession and I have a modern modest proposal to prevent our current recession from turning into another Great Depression.‚  Please kindly consider my humble idea for turning America’s frown upside-down. 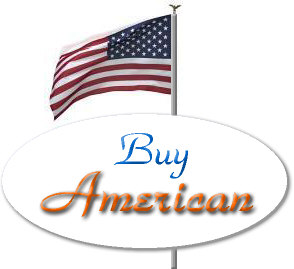 The U.S. Congress recently passed a bill forcing companies that accept bailout money to buy American and Congress is also now considering taking some other protectionist measures.‚  The good men and women serving our country in Congress have just the right idea: if everyone buys American goods and services that will rescue our stranded economy.‚  I wish I was smart enough to come up with such a great plan, but even though I didn’t come up with it I think that we should carry it further:‚  We should force everyone in our country to buy American!‚  If everyone bought American that would pump a lot of cash back into the economy, helping all of us.

Buying American is not just an idle activity, it is actually each American’s patriotic duty.‚  Our Founding Fathers firmly believed that American money should stay in America, which is why they instigated the Boston Tea Party and the American Revolution.‚  They didn’t want to pay taxes anymore to those ugly, selfish Brits.‚  People who lived in America, but fought for the British were considered traitors.‚  In today’s world, a person who buy goods or services from a non-American source, is also a traitor and should be promptly punished.

Outlawing companies and re-educating people who don’t buy American goods and services needs to be our top priority in this country.‚  Filthy foreigners keep taking our American cash out of our country and this must stop immediately.‚  Did you know that foreigners even take our women in marriage?!‚  These people who hate American freedom are wedding women who should be reserved the men who work hard in our local unions.‚  I suggest that we set up a National Commission on Fairness that ensures each hard-working American man gets the woman that he rightly deserves.

I was joyful to hear that Congress has looked out for good American interests already by beginning to erect the United States-Mexico Border Fence to help stem the flow of evil trade and immigration.‚  We need to ask Congress to carry this concept further and put Americans to work building the greatest Great Wall in history around our entire country to ensure that only American goods and services are bought and sold within our borders.‚  The Great Wall of America will help us defend ourselves against cheap labor and cheaper products.

To doubly ensure that American money stays in America, President Obama should immediately nationalize all of the banks.‚  Did you know that some American banks lend money to companies in other countries rather than to red, white and blue wearing people?‚  Obscene.‚  Not only that, but poor Americans who don’t have good credit scores are having their lines of credit on their cards reduced!‚  How will we ever get out of a recession if people can’t buy new cars, plasma televisions, kegs of good beer and Viagra?!?!‚  Nationalizing all of the banks in America and ordering them to triple the credit lines to every American will immediately save us from entering a second Great Depression.

Once the banks are safely in President Obama’s trusty hands, we need to make sure that he has firm control of the rest of the economy as well in order to make sure national financial disasters never again occur.‚  The President and Congress have shown themselves time and again to be the wisest people in all of America and as such they should control all economic activity.‚  Private ownership is silly and outdated; it is far better to allow the great minds in Washington D.C. to oversee the allocation of capital and manage the distribution of goods and services.‚  Our nations leaders have never abused the American people’s sacred trust by taking what isn’t theirs.‚  We can trust them to look out for us.

Finally,when our country is firmly secure in the hands of our wise political leaders we may still not be out of our recession.‚  Our enemies, foreign labor and goods, may still be sneakily holding back the great American economy.‚  If so, we should not hesitate to take glorious military action in order to defend America.‚  True American patriots will be‚  glad to die for our motherland and her precious economy.‚  Remember: BUY AMERICAN!