What is the Singularity: Singularity is the theory that technological innovation is increasing at an exponential rate and will reach a point where artificial intelligence surpasses human intelligence and is then able to create higher intelligences even faster than before. What happens at that point is unpredictable to human minds because we would be unable to comprehend it.  Most futurists predict that this event will happen sometime between the year 2030 and 2050, with an median of 2040. My personal opinion is that with the recent creation of computers that mimic human neurons, quantum computing and other technology, this technology is closer than we think: perhaps 2025-2030. 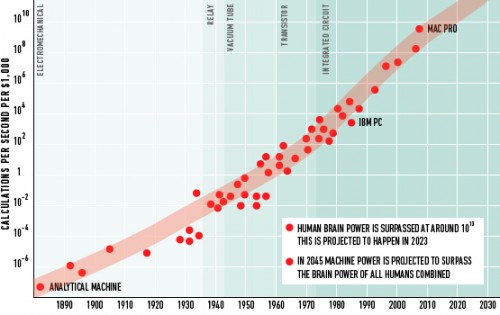 What will happen after the Singularity? Many people debate on what will happen at this point. Some think the world will turn to a utopia if artificial intelligence puts human best interests first: no more war, crime, disease, death, accidents, hangovers, etc. Basically like the Christian version of heaven, except instead of a mythical supernatural being, we will have a massively powerful computer watching over us. In the dystopic versions, the computer decides it needs to use scarce resources to advance to the next level and causes human extinction by turning our entire planet into a massive machine.  My personal opinion currently is that the artificial intelligence will look at humanity just like humanity looks at ants: it will spare us very little thought and will not hesitate to build a house on top of our ant hill.

Can the Singularity be prevented? Probably not, short of humans going extinct ahead of time. Scientists have always worked on technologies without much regard to how they affect the rest of humanity. The first time they tested an atomic bomb, a significant portion of the scientists who built it thought it might set the atmosphere on fire and kill the entire planet. We have many scientists now working on crafting genetically modified superdiseases and chemical weapons. Technology is being pushed forward at faster and faster rates. Short of the deaths of the majority of the population, stopping the Singularity will be extraordinarily difficult.

If I believe in the Singularity, should I change the way I currently live my life? This is an interesting question of ethics… I guess it depends on the probability with which you think that the Singularity will come to pass, whether you believe the result of the singularity will be positive or negative to your life, and when you believe it will occur. I am thinking this through as I write this post… above I said the Singularity will likely occur in 2025-2030 (11-16 years from now)… the result has in my opinion a 50-50 chance of creating an intelligence that will look at us like ants.. hmm. Should I change my life if I knew I had 15 years to live? I don’t think I would. I enjoy my lifestyle and am happier than I’ve ever been working and doing what I do.