I found this interesting bit on ESPN.com’s TMQ column about the bailout debt and how it is rapidly skyrocketing.‚  TMQ summarizes some other news sources findings about what has been occurring with the money given to all these corporations by our government.

” On Nov. 24, the Washington Post calculated the total cost of the bailout-a-rama may rise to $2.8 trillion, though the figure includes guarantees for loans that may end up being repaid, thus reducing the final tab. Just two days later, the Post recalculated to $4.7 trillion, after the Treasury Department (“Hey Hank, should this say billion or trillion?”) made huge additional commitments to cover bad loans, again some of which may not fail. The $4.7 trillion figure equals the entire national debt on the day George W. Bush took office. One day after that, the New York Times calculated that so far this year the United States has actually spent $1.4 trillion on the bailout, while committing to as much as $7.8 trillion, if all loans default. The $7.8 trillion figure equals the entire national debt just three years ago.

The speed with which government is giving away money is breathtaking. In less than a year, the United States has casually added to the deficit — with virtually no public accountability and in most cases without a vote of Congress — at least $1.4 trillion, an amount equal to almost three times annual Social Security benefits. Anyone who a year ago had proposed doubling Social Security benefits would have been hooted down as fiscally irresponsible, even by senior citizen advocates. Last week, White House officials casually announced that an extra $800 billion — more than the fiscal 2009 defense budget — was being spent, without a congressional vote, without public accountability, sometimes without even knowing what the money is being spent on! (Treasury officials have said they do not know what AIG is doing with its billions in tax funds.) In 2007, Bush vetoed an additional $7 billion for health care for the poor, saying the country could not afford that much. Now taxpayers are on the hook for up to 671 times the figure Bush said was too high. Our children and their children will be paying for this mess in Washington for a long, long time. 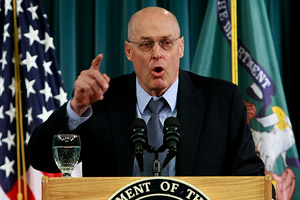 Note 1: When all this started last winter — back when Henry Paulson said that Fannie Mae and Freddie Mac would “never” be bailed out — economic columnist and 2008 Nobel Prize for Economics winner Paul Krugman calculated that converting to present dollars and adjusting for GDP size, the 1990s Japanese financial restructuring had cost that country $3 trillion. Krugman predicted our meltdown would eventually cost America about the same. Krugman said this at a time when Paulson (“Hey Hank, five minutes have passed, what’s your policy now?”) was asserting in public that the damage would always be limited to the $29 billion given to Bear Stearns. Based on recent numbers, Krugman’s prediction may prove eerily close.

Note 2: AIG, which has been shoveled $152 billion of your children’s money without accountability, announced last week that new CEO Edward Liddy will work for $1 a year and receive no bonus. Sounds good, and media reports were favorable. But buried in the announcement is that Liddy is also receiving stock (“equity grants”). The announcement mysteriously does not say how much. With AIG selling for $2 a share — the strike price of the grant would be the price when awarded — even if the shares rose only to $5, a large block of stock acquired at $2 could be quite valuable. So how come AIG doesn’t disclose how much taxpayer-subsidized stock its CEO is pocketing? 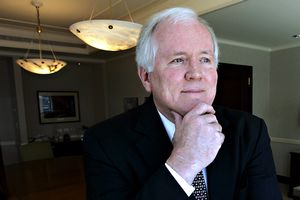 Also buried: Liddy “may be eligible for a special bonus for extraordinary performance.” Have you ever read anything more transparently phony? A good guess is that no matter how the current CEO does, the board will find he deserves a “special bonus” that won’t be announced until media attention has shifted to whatever the next scandal is. Sadly, reader Melanie Cleten of Providence, R.I., notes, “AIG’s management has tricked taxpayers into handing the company $152 billion. What other corporate executives in history have brought in so much cash so quickly? Maybe they do deserve bonuses, unless we are fools.” She leaves it there.”

I am personally horrified by all this.‚  Anyone else feel the same?