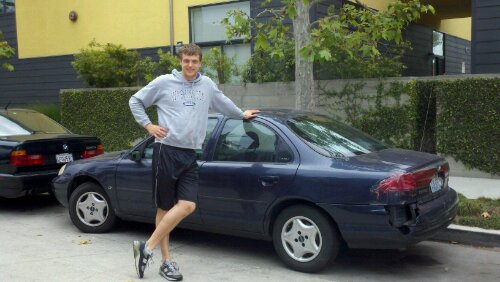 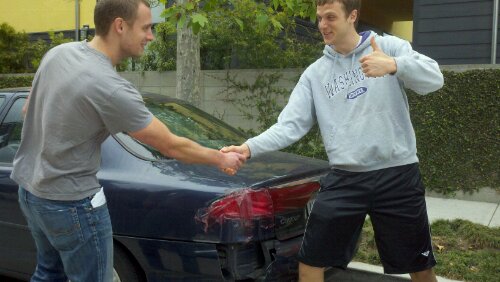 Today is a sad day as I part with my 1999 Ford Contour that has served me well for the last six years. It is only the second car I have ever owned.

The Contour is in good hands now though since I have sold it to my friend Kenny Cornutt for $800. He wanted a beater car for his long commute so he didn’t put so many miles on his Mercedes. The Contour has strong internals but is pretty beat up cosmetically (someone did a hit and run on the corner of th bumper while I was in Seattle, and the dash is peeling up).  I gave Kenny a pretty good deal- a price below both Edmunds and KBB. Hopefully the car serves him as well as it has me.

My grandpa helped me buy the Contour six years ago for $2900. The car has essentially cost me slightly less than a dollar a day to own (excluding maintenance and gas) for six years.

I had Tara take a funny photo of Kenny and I below with me looking like a sleazy salesman.