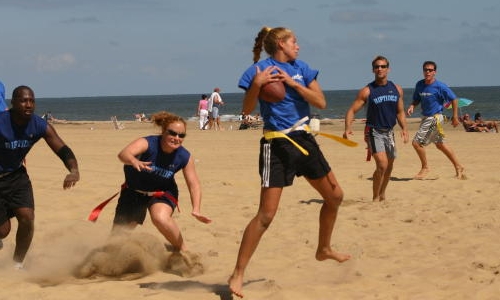 When I first moved to Los Angeles, I not only founded Coalition Technologies but I also founded a flag football group that plays on the beach directly out front of my original home office. After the first year, I had grown the flag football group to around a hundred total members and we had 20 or so people consistently show up for games. Once I moved from that original home office to our new office in Marina Del Rey, I gave the group to Rich the biggest regular player and haven’t been able to play again since I have been so focused on Coalition.  Rich has since grown the group to 932 members with 70-90 people showing up each week to! It has even spawned a big spinoff group that plays in Santa Monica! Pretty awesome to see the growth of beach flag football, a super awesome sport that I was able to launch here in LA.

Rich just invited me to come back as a guest speaker (not sure where speaking comes into playing flag football lol):

Joel,
Great article about CT and your role as CEO. They left out the part about you also founding one of the fastest growing Meetup groups on L.A. as well. Don’t know if you noticed but we are nearing 1000 members! You will always be recognized for your contribution here as long as I am around. You should be proud of so many accomplishments. We are going to have a Summer Season Pep Rally/Kickoff at a local Venice establishment in a few weeks to coincide with our 1000th member attainment.
Would you be available as a guest speaker? It will likely be on a Saturday afternoon around 3:00 (after football). Somewhere around the end of the month. We are at 932 members right now so it will take a while before we get close to 1000. I’ll keep you posted!
Rich