Justin, the third brother in my family, is stricken by the same affliction as I am.  If we reach a certain rage threshold we stop caring about consequences and lash out as hard as we can.  I have had the misfortune of being on the receiving end of his fighting spirit before and it is unpleasant.

When I was about 13 and he was 9ish, we were horsing around around after dinner by our big wooden dining table and I was teasing him and pushing him around.  My dad and other brothers were still sitting down eating and laughing at us.  Justin’s temper kept getting hotter and hotter, but I got him in a bear hug from behind and used my size to keep him from doing anything to me while I harassed him goodnaturedly.  He had had enough though; his face was red and he was steaming mad though there wasn’t much he could do.  Finally his anger thermometer burst.

He bent down at the waist as far as he could, pulling his head and body down into a a standing fetal position.  His head was lowered to down by his knees and with a sudden violent leap used his entire body’s force to slam the back of his head into my nose in a mighty headbutt.

After a stunned second of silence, I flipped him upside down and my dad yelled, “STOP!!!”, just as I started downwards in a piledriver. 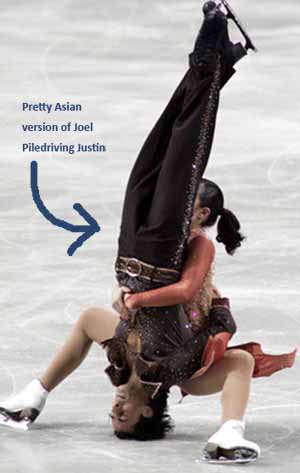 I froze and stared at them for a second deciding what to do.  I laughed and flipped Justin right side up and went and got some tissue for my nose.