I rode my bike to Rachelle’s house and had a nice dinner of salmon salad and wine. At around 5:30ish, I was riding my bike back home to meet a friend. As I was cruising down 3rd street downtown, my bike chain suddenly locked up and the next thing I knew I was lying on my face in the street. I laid there for a couple of seconds in shock, then started to wiggle body parts one by one. When I discovered that everything was still fully operational I hopped to my feet and surveyed the situation.

I heard a drizzling sound and looked down and realized my chin had been cut open pretty bad was leaking blood all over the street. Some kind gentleman stopped and gave me a first aid kit, which I used to cover up my chin temporarily. I felt something hard in my mouth and poked it out with my tongue and realized that I had lost half of a rear molar when I faceplanted on the asphalt with my chin. I pulled it out and stuck it in my pocket. Interestingly enough nothing really hurt, I was just pissed off. My bicycles frame and handlebars got mangled pretty good too.

I started calling friends to see if there was anyone who could give me a ride home. Rachelle was shopping with her brother and they didn’t think they could fit my bike in their car, Fletch was in Packwood and the few others I called didn’t pick up. So I started to try to hail a cab.

Apparently cabbies are afraid of helping bloody people, because I must’ve had twenty cabs drive by with the drivers shaking their heads before one finally stopped. It’s helpful to be reminded sometimes that you can only rely on yourself lol.

When I got home, I took my first look at my chin in the mirror. I had a little second mouth hanging open. Before my friend arrived a half hour later, I took some pretty pictures. The gash was about an inch deep, but the bleeding had mostly stopped up. All the pictures are from before I went to the ER, except for the last two with the shiny antibiotic shit on my face. The little white thing on the counter is the broken part of my tooth. I had to get a tetanus shot too. 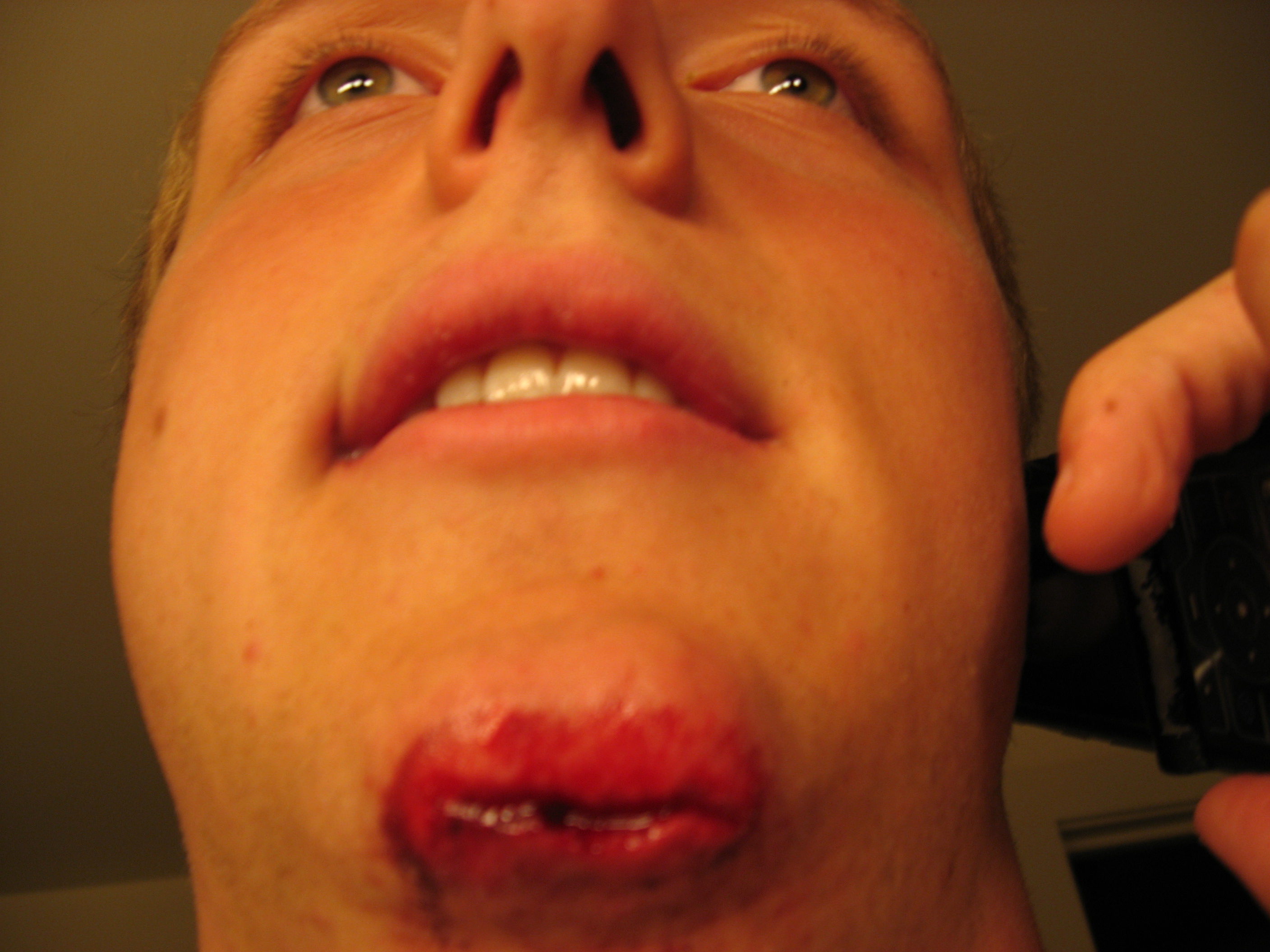 My very kind friend drove me to the ER and laughed and joked with me the whole way there and kept me giggling the whole time they put in all the stitches. I owe her a huge favor. By far the best time I’ve ever had with doctors around… even the doctor stitching me up kept laughing. Good times.

Damage report: I now have 3 deep-tissue stitches holding the inside of the wound together and 7 stitches on the top. My tooth has a temporary cap on it and I’m going to have to visit my orthodontist ASAP. The doctor said I’m going to have a pretty gnarly scar under my chin.

Some of the best ER jokes:

Me: “Want to make out with my second mouth?

Friend: “I’m glad we can keep you in stitches!”

Me as the doctor sprayed saline solution on the laceration and some got in my face: “It’s like a day at the beach!”

Friend to doc: “Will he still be as pretty as before?” Doc: “No”