Saturday, June 2nd, 2018 9:30 am: My friend Ryan and I went rollerblading together near downtown Long Beach. I usually wear knee pads, elbow pads, wrist pads, and a helmet. I had forgotten a knee pad at home though, so I made the dangerous decision to wear only my wrist guards and helmet.

We parked near 6th and Magnolia and found our way over to the paved bike trail along the LA river that connects down to ocean front bike path. We had a great little ride and were headed back to the car. I was looking for a way to connect from the path to the surface streets and spotted a concrete road going down a hill to an abandoned underpass. This was the fastest way back to the car.

I started skating down the hill and it did not look too steep at first. I did notice that the road was filthy and there was even some hypodermic needles on the ground. I continued to pick up more and more speed and was unable to slow down much. I saw a big wet patch on the concrete ahead of me, so I stopped trying to slow down and put my feet parallel to try to maintain better balance. The instant I hit the wet path, I could feel my feet do the splits underneath me. The splits caused me to fall forward and take the brunt of the impact on my knee before I caught myself with my wrist guards. I slid approximately another twenty feet according to my friend Ryan who watched the fall. I started tosit up thinking that only my ego was really injured when Ryan said, “Dude, your knee looks really bad you should sit back down”. I sat down and looked at my knee and could see the flesh torn about five inches wide and three inches deep. It looked like a big steak hanging off of it. I started to shake and felt weird parts of my body go numb as I went into shock.

There were homeless people nearby and I did not want to be left alone with them, so I tried calling 911. The operator was unable to spot my location on his map and I didn’t know where I was, so I just told them Ryan would drive me. Ryan went and got his truck and came back in about five minutes. He wrapped up the wound and did a heavy squat to pick me up and load me in his back seat with the knee straight. While I had been laying on the ground waiting for Ryan to return, I did research on my phone on the highest rated emergency rooms in Long Beach. I ended up picking one that seemed decent and was very close to where I got injured – Saint Mary’s. I went into the emergecy room and was fairly quickly taken back. I spent the next eight hours having people review my injury and decide what to do. A Physicians Assistant named Kayla was in charge of my case. An amazing nurse named Ethan made lots of jokes and made my experience much better. Another doctor named Gretchen did the actual work of sealing up the injury. Gretchen was concerned though that there was more filth in the injury than she could get out, but she spent a lot of time trying to get it clean anyways. Laurel and Ryan kept up my spirits by making lots of jokes about the injury and the ER. Ryan and I also played Risk on his phone. I took some photos of the horrified reactions of Laurel and Ryan to looking at the wound and seeing it poked and prodded with the flesh hanging out. Around 7 pm, I was released to go home. The next day (Sunday June 3rd) I went back into the ER for a follow up visit. They thought it looked okay at noon, but by 5 pm I developed a rapidly increasing fever that went up a degree every hour. When it reached 102, I had Laurel take me back into the ER. They admitted me to the hospital (which has all private rooms) and started me on a bunch of the most powerful antibiotics we have.

On Monday and Tuesday, I was in a lot of pain and was taking morphine and Norco and Ibuprofen to help deal with it. The infection was continuing to expand up my leg even with all the antibiotics though. Tuesday night I got a bad fever but since they were supposed to do a surgery to clean out the wound the next day I wasn’t supposed to eat any food or water. I was really miserable and crampy and had a terrible night. The redness in the picture above is the infection spreading up my thigh and down my calf.

On Wednesday, I was sleeping pretty hard and deep. I woke up in a haze to someone stabbing my arm to put a huge needle in there. The universe seemed like it was getting sucked out of the wall – I was extremely disoriented. I finally understood that this was not just a dream but was real life. A nurse was trying to move me off the bed to a chair nearby. It finally clicked that this nurse had replaced my existing needle with a larger one and I had bled on the bed and he wanted to replace the bedding. I thought I was in some fantasy world. Pretty crazy. During my two weeks in the hospital, I got used to peeing in little bottles called urinals so I didn’t have to get up and get assistance each time. For awhile I had to use a commode and have a nurse help me get on it and off it.

I had some really great nurses during my two weeks there and some really terrible ones. Martha was excellent,;Joni, MaryLou, and Chelsea were decent. There was a male CNA who was terrible – he said he hated his job and everything he did was very sloppy. I wouldn’t want to be more incapacitated and in his care. Laurel and I got much closer through this ordeal. Our marriage is very strong. Laurel is an amazing wonderful person. She spent a ton of time helping support me through the entire process. We listened to some folk music and watched various tv shows. The doctor cleaned out the wound in surgery and cut out the bad parts. They decided to leave the wound open and use a vacuum to suck out the bad stuff. You can see the open wound above between wound dressing changes. By the way – changing a negative pressure wound vacuum dressing is horrifyingly painful. The day of the surgery to clean out the wound was Thursday, June 7th. They wiped me down with alcohol sponges to sterilize my body and took my boxers and tshirt (I spent the next week naked except for my open in back gown, got used to this). The drip feed for my fluids did not replace water in me quickly enough, and I ended up peeing dark brown colored urine.

Dr. Christopher Hoshino was scheduled to do the surgery, but he didn’t show up and instead his friend Dr. Zihar did it. It was an unpleasant surprise to be in the OR and discover that the doctor you thought was doing the work wasn’t doing it. Dr. Zihar did a good job though and cleaned out the knee well and stopped the infection.

Laurel tried to stay with me the night after the surgery, but I moaned most of the night so she went home around 2 am. I really struggled this night – it was the low point as the infection had spread 2/3rds up my thigh and I was in a ton of pain from the surgery. I was really suffering that night and the pain caused my back to get very tight so I rolled around constantly in misery. I ended up taking a lot more morphine and Norco that night and finally fell asleep around 5 am after having been awake more than twenty four hours.

Friday night June 8th was also very painful. I was in more pain than the morphine and Norco could handle so by 7 am Saturday I was giving Dilaudid which was a much more powerful pain killer. That helped me relax and get some sleep. Once I slept I felt much better.

Physical therapy went well and the second lady who saw me was best. I could actually walk on the knee since there was no structural damage to the tendons or ligaments or bone. Josh and I had an excellent discussion on the evening of June 9th about whether Coalition should take on clients that sell parts for AR-15 assault rifles. I explained my position on why I think these problems need to be solved at a systemic level rather than an individual level.

Over the next few days I watched a ton of police videos and a ton of SNL videos on Youtube. I became a much bigger supporter of the police watching hundreds of interactions where the officers were very patient and even if they shot someone in a shootout they immediately rendered assistance to them.

I had some people tell me I need to be grateful to God (who I don’t think exists) for saving me. If I had died then should I be ungrateful? This line of reasoning never makes sense to me. That was the wound Thursday June 14th, the day before the surgery to close it.

The wound was closed on Friday, June 15th in surgery. Dr. Hoshino did the surgery to close it. When I woke up from surgery I was in incredible pain. I got authorization to take more morphine than usual and basically piled on a lot of drugs last night. This helped me to get a good nights sleep. This morning, Saturday June 16th, I get to go home! I feel much better now and have little pain.

Dr. Wu did the best job of my attending physicians. I think Dr. Nga did not like me because I once accidentally called him Dr. Hoshino. Dr. Nga always rushed in and rushed out of my room and didn’t seem that well informed on my condition. I was very happy with Dr. Wu though – he spent time explaining things to me and did good work. I think both Dr. Hoshino and Dr. Zihar did good work in surgery but I was disappointed to never see them outside of it. Their Physician’s Assistant Tricia did not seem to like me much since I asked a lot of questions, but did a solid job. Debbie, the wound dressing changing nurse, was good too. Her assistant was mediocre though. Today I get to go home. It will be nice to get out of this hospital bed I have spent the last two weeks on. My knee is now closed up, the infection is gone, and I feel better. I will be back in two weeks for a checkup, then two weeks after that I will have the stitches removed. I am going to start trying to walk on it right away and get it back in shape. Hopefully in a month or two I can be running again.

Lessons I have learned:

The knee has been improving rapidly. I can walk with only one crutch and don’t need it much. I am also getting more range of motion back. 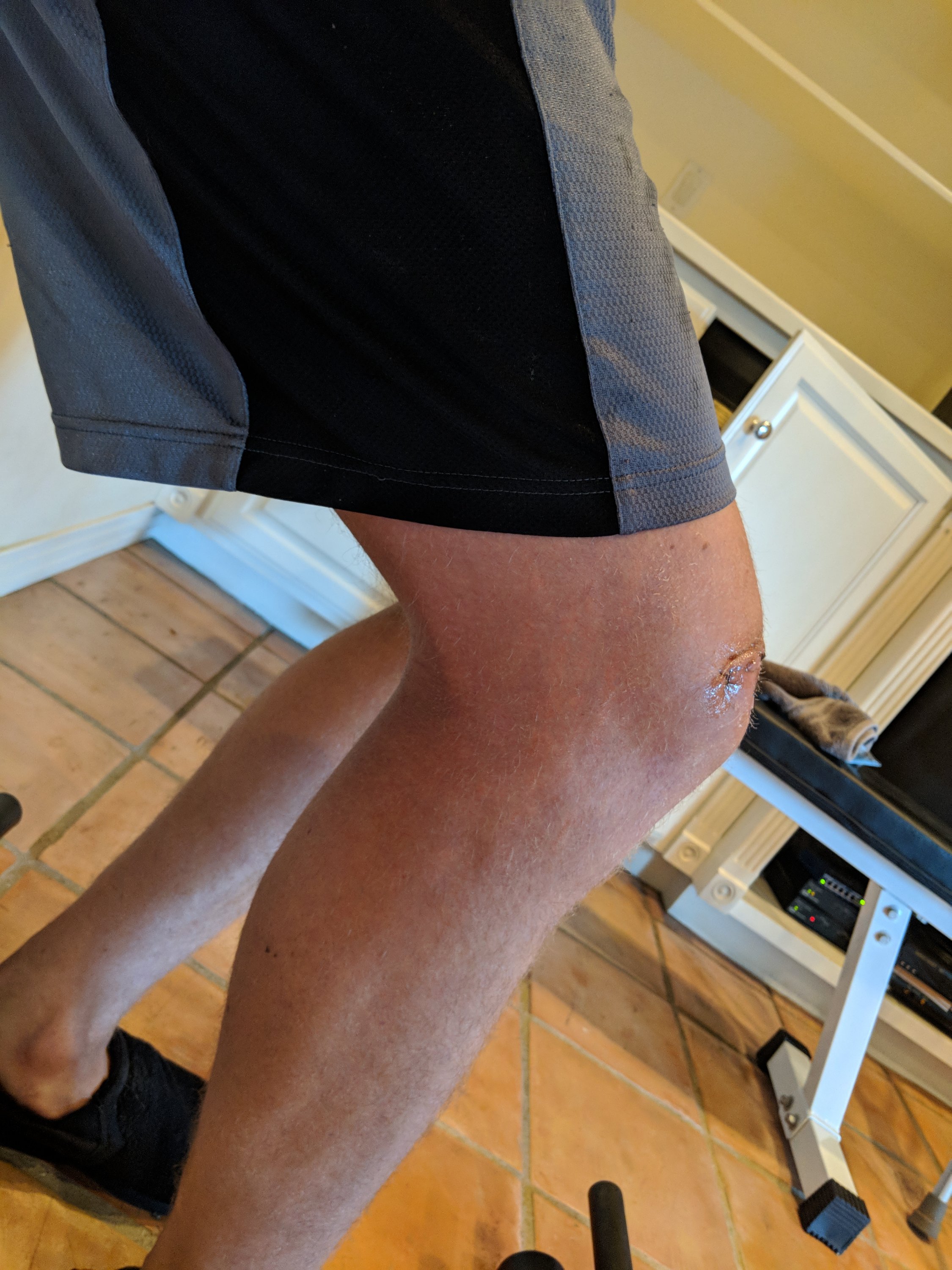 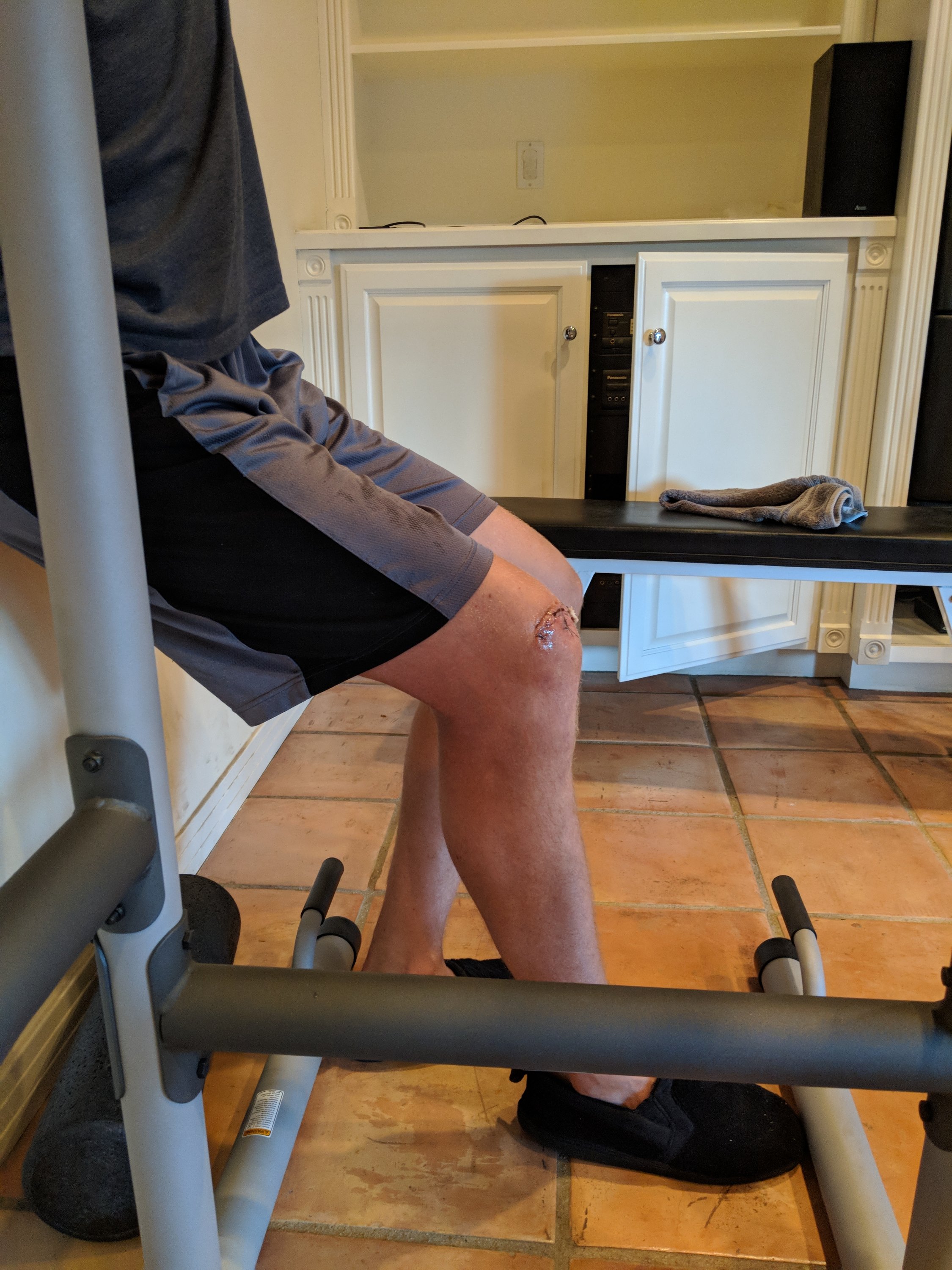