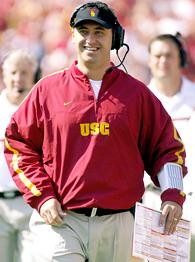 ESPN has reported that according to multiple sources, Steve Sarkisian (currently USC’s offensive coordinator) will soon be declared the University of Washington Huskies next head football coach.‚  Steve Sarkisian currently denies the reports, saying “I have interviewed with Washington.‚  They’ve interviewed a lot of people. I’m one of a number of candidates, which I’m honored to be. Nothing is finalized in any way, shape or form. There’s been some communication. Nothing has been put in writing. “‚  Sounds to me like Steve Sarkisian just has to say that until USC finishes it’s regular season and perhaps its bowl game.

Steve Sarkasian is a very young man, only 10 years older than me, and will be holding a great responsibility over many college football players lives and will make at least a couple of million dollars per year.‚  Steve Sarkasian attended BYU for college and was the team’s starting quarterback and received many honors.‚  He finished his senior season with a 13-1 record.‚  During his senior year at BYU, Steve Sarkasian had a 173.6 passer rating which was the best in the NCAA.‚  Steve Sarkasian went on to playing in the CFL for three seasons before becoming a coach.‚  For the last two years he has been the offensive coordinator for the USC Trojans.‚  Steve Sarkasian is partially responsible for the amazing development of Carson Palmer and Matt Leinart (both won Heisman’s) as he was the quarterbacks coach in 2002 and 2003.

What do you guys think about the University of Washington football team hiring Steve Sarkasian as the new head coach?‚  Is it a wise decision or a poor one?‚  Or perhaps even do you think that ESPN’s multiple sources got the story of Steve Sarkasian being UW’s new head football coach wrong?